It has been a while already since my last input mainly because of my vacation. I have taken a couple of days off to break the routine and now am ready to add more content on this page. 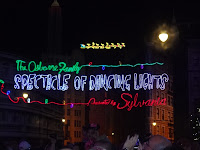 Today, I would like to share a special event that is going on during a limited time in the year, the holiday season. This special event is called the Osborne Family Spectacle Of Dancing Lights, and offers both Sight and Sound experiences.

The origin of this colorful event came from a simple request from a little girl from Arkansas to his parents in 1986. The little Allison Brianne Osborne (also nicknamed "Little Breezy"), asked her parents to decorate their house with lights for Christmas. Her father, Jennings Osborne (1943-2011) installed 1 000 lights on the house that year. Each and every year since, the amount of lights increased until it reached it's pinnacle. In 1993, Jennings Osborne had owned two adjacent lots and over three millions lights were installed on the property. The concept and the display was then purchased by Disney in 1995 and has been presented from mid-November to January, every year at Disney's Hollywood Studios, now located in the ''Streets of America''.

As the sun goes down, the Guests at Hollywood Studios start to gather in the Streets of America where refreshments and live music is presented. The holiday atmosphere is appreciated as we can feel the excitement in the air. The whole buildings on both sides of the street are filled with LED and are an amazing spectacle when they are turned on. The buildings are litterally dancing to the music, to the enjoyment of the crowd.

I had the priviledge to witness the 2011 edition, a year where a major upgrade was completed. All the lights on the site were replaced by LED and were coupled with state of the art technology that enhances the Sight experience even more. Some of the lights are now dancing fluently with the music, an impressive piece of work.

The musical show lasts a couple of minutes and captivates the Guests' attention. Once the show is completed, the lights stays on for the remainder of the evening as Guests scatter to leave some space for those who could not enter this highly crowded area. I have really enjoyed the event as it really brought me into the spirit of the season that year. I remember leaving the Street of America after the show with only one idea in mind: To buy a Christmas present to my niece and my nephew!

In conclusion, I think that The Osborne Family Spectacle Of Dancing Lights is a fabulous event that's worth the price of the admission by itself. I had a wonderful time and would repeat the experience again without any hesitation. If you plan on going to Walt Disney World resort during the holiday season, then this event is a must-see.

Your comments/opinions about this event are welcome!

Have a magical day,